While working on the fonts, I decided I should add a right-to-left version of Glyphic, since hieroglyphs could be written in either direction (or top-to-bottom, for that matter). Easy enough to do — select all characters, mirror, save. The problem comes in with using it: you’d have to type backwards!

The obvious solution to that problem is the program I wrote a few days ago, Text Jiggler.

So now Text Jiggler has a “Reverse” button that will reverse whatever text is in the main window. While I was at it, I added a  couple more features. Now it looks like this: 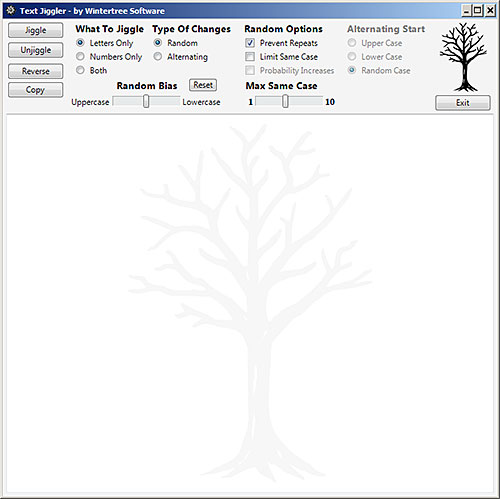 One, “Limit Same Case”, limits the number of consecutive instances of the same case. That is, if the slider is set to 3, no more than 3 characters in a row can be either lowercase or uppercase. Technically, “Alternating” is now just a special case of that, with a Max Same Case value of 1, but I left it as its own thing for consistency.

There’s also an option currently called “Probability Increases” used in conjunction with the random options. If turned on, this makes it more likely that any given character will flip to the opposite case as the Max Same Case value approaches.

I also added a “Random Case” option to the UC and LC starting options for Alternating.

Aside from that, I just rearranged the screen a bit for a better fit. It’s not the most earthshaking of software (maybe about magnitude 2) but it gets the job done.