In addition to working on the Mac port, the new table pack, and a bunch of new commands in TableMaster, I’ve been updating the old fonts. I’m pretty happy with the results, not least of all the PolyDice fonts. They’re on DriveThruRPG now. Here’s the bundle of all six varieties: Fonts on DTRPG .

The PolyDice bundle contains a total of 72 fonts. They depict all six varieties of polyedral dice in both outline and solid (I was going to say black and white, but of course that’s dependent on what you’ve got your word processor set to), and three different styles: sharp-edged, rounded-edged, and minimalist. Using the latter, you can do those cool 3D shaded effects — any color of dice graphics you want with nothing more than your word processor.

And they’re not just numbers like you’d find on real dice. They’re also a full alphabet! You can use them to make character sheets for your game, signs for your store, or anything else you can think of. Plus those dice that have numbers of more than one digit have separate numbers varieties to handle that, as do the d4s that have two different numbering styles available (numbers in the corners or edges).

Individual fonts are also available separately, for those people who might only want, say, the d20 ones.

There are more fonts coming soon. I started to update the old Arcane Alphabets and kind of got carried away.

The new InstaGraph and InstaHex are nothing short of amazing, if I do say so myself. They’ll be up as soon as I get the last few wrinkles with some of the line widths worked out. They’ll come in a package with PDFs of useful graph and hex paper sizes and layouts, ready to print.

Yes, that’s a font. And it’s back, with more types of buildings, more overlays for things like a moon, and even a volcano with optional lava! 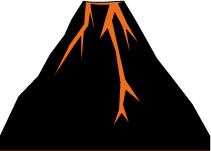 There’s also a new blackout style, too, with the windows removed. It’s coded as boldface so you can turn your lights on or off at once, or have lights in just certain buildings.

There are dozens of ancient alphabets, weird ciphers, symbol systems like Braille and semaphore … I even did one for the Discworld “clacks” system, though I’m still waiting to hear back from Terry Pratchett’s estate about selling it. There are real ancient Egyptian hieroglyphs and an “English-ready” set where the first letters of the names of the images can be used to spell with. Both of them are set up so the short characters stack properly, which no other hieroglyphic font does. There’s the Orc runes that were never released back in the first incarnation of Wintertree (I finally found the documentation for those on dead trees), strange and esoteric alphabets, all kinds of stuff.

They’ll be trickling out on DriveThruRPG as time permits, and of course available at conventions and on the Wintertree website on CD. And all, of course, have complete documentation, everything from character maps to sample files where necessary.

1 thought on “Fonts! Get your red-hot fonts here!”