Here’s another scan from the box: 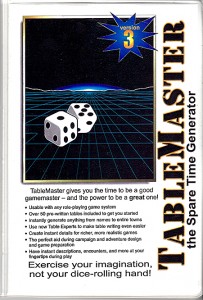 It’s the outsides of the packaging for TableMaster Deluxe — the pack that had TM/Win and all four table packs on a CD in it (the regular versions were on floppies). The cover was a color copy, so some of it has suffered a bit over the years for the same reason the catalog did — copier toner just doesn’t do well in 140-degree attics — but back in the day, it was pretty cool.

There’s a bigger picture after the jump.

These were really neat — they’re a thick-covered 6″x9″ folding case with a slash pocket on one side (the CD, various inserts, the catalog, etc., all went in there) and a full-height pocket for the back cover of the manual on the other, and of course space for front and back cover inserts. They basically made the manual into a hardcover book with space to put the CD and all. 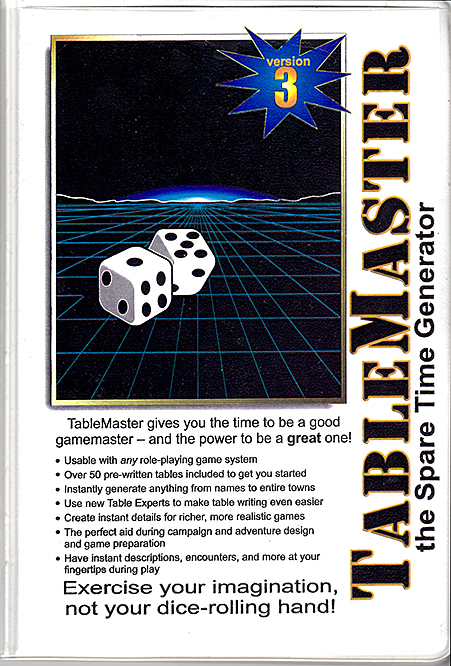 Unfortunately, I no longer have any idea of where I got them from (though I kind of remember it being in the midwest for some reason), and I haven’t been able to track them down. Admittedly I’ve been more focused on building the product than finding packages to put it in. I wouldn’t lay money on the packaging still being available, or even the company still being in business, but if anyone happens to recognize them, please let me know!

If there is a physical version of TableMaster, instead of just an electronic one (i.e., if I go to conventions again), it’ll probably go in DVD cases. They look nice, and they sit on shelves, and I can get them in the right color, but they’re not as cool as those binders.

Reading through the TableMaster for Windows insert for nostalgia, I was reminded that I’d included a feature that allowed a user-specified graphic to load in place of the plugged-in die logo on the TM/Win main screen. I need to add that.

More old trivia: In addition to the fancy CD binders like the one in the scan, I had cardboard boxes that slid into a printed cardstock sleeve. I doubt if I have any of those anymore, but who knows what might be in the bottom of a box I haven’t looked at in a couple of moves or something. The graphics on the sleeves I used most of the time were okay, but the original ones were better — the were similar to the black-background graphic in the upper left of the picture above. Unfortunately, they were murder on the color copier at the place I was getting them done! According to the factory tech who came to fix it, as relayed by the owner, large runs of full-coverage black were a Thing Not To Do, and could potentially violate their service contract. Not to mention taking the color copier out of service while they waited for the tech, of course. So I switched to a less dramatic, but far more copier-friendly, design.

Back in the day, I couldn’t just print out a master on my own printer; high-res color printing wasn’t a thing. So I had my masters printed at a service bureau (from files on floppies, of course!), and then took them to the print shop to get the covers made. I have memories, and not fond ones, of the turnaround time at the service bureau in question.

It’s a little ironic, in a way, that nowadays I’d be able to produce really nice packaging for TableMaster, but the odds are that it will be sold electronically, off my website, and not have any packaging at all. I remember when I first bought Delphi about 20 years ago. It came in a big box from CompUSA. Now CompUSA hasn’t even existed for years, and when I bought the latest version of Delphi, a registration code and download link arrived in my email. That has its advantages, certainly (as witnessed by my bookshelf!) but in some ways, I do miss the more tangible versions.

Ah, well. Back to coding. I’ve got the skeleton of the dice parser in; just need to add the error checking. (I don’t suppose y’all would just promise to write error-free dice strings?)