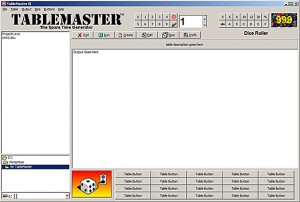 I’m trying to stick fairly close to the old layout. I’ve moved a few things around, and I’m thinking of doing something a bit different with those upper buttons (probably involving a toolbar) because there are better ways to do it now, but mostly, it’s going to look like the TableMaster you remember.

Well, the TableMaster for Windows. Sadly, TM/DOS is no more, not least because real DOS is no more. Personally, I always preferred that; I did my table development with that interface.

A story from the old days: back when I first sold TableMaster, at the very first convention I had it at* I had built this pretty graphicsoid-text UI for it. I don’t even have a screenshot of it anymore, but I remember that it was quite pretty. And, well, kind of annoying to use, but pretty. That wasn’t what I used for myself, though; I had a really ugly one, just a screen full of table names and a few options, that worked well for me. So there I am, and I’m working on some table during a slow time, and a user asks me “how come you’re selling the crappy UI and keeping the good one?” I learned something back then: pretty looks good for the reviewers, but functional looks best to the users. And that’s who it’s all for, after all. So that “ugly” UI was the front end for TM/DOS, and every user interface I’ve built since then is designed to be functional before pretty. It’s all about using it, not admiring it.

But I still like the old TM/DOS interface better.

*I signed up so late for that convention, the dealers’ room was full and they put my table out in the hall next to a LARP group that had a 30-second video on endless loop; to this day I hate the background music from it.

Back in the day, I wasn’t all that good at setting proper version numbers. The original TableMaster was up to 3.something, when it really should have been 1.3.something. That leaves me with a problem today, though, in that there would be some confusion. “TableMaster 2? But I already have TableMaster 3, I bought it in 1998!”

So, to keep things sorted out, I’m going with Roman numerals in the name. It’s TableMaster II, and version numbering will start over and be where it should be.

Beside, I’m black-boxing a lot of it — that is, starting with the known input and expected output, and writing what goes in the middle without reference to the previous code — because, frankly, there are places in my old code I’m afraid to go. There are a lot of better ways to do things than what I did in the process of learning Turbo Pascal in 1992, which is how the first proto-TableMaster got started. (and obviously I’m not using Turbo Pascal anymore, either!) So since it’s going to be mostly new code anyway, it’s definitely a new program; just one that does what the original did, only better. And without the grues lurking in the dim recesses of the code.